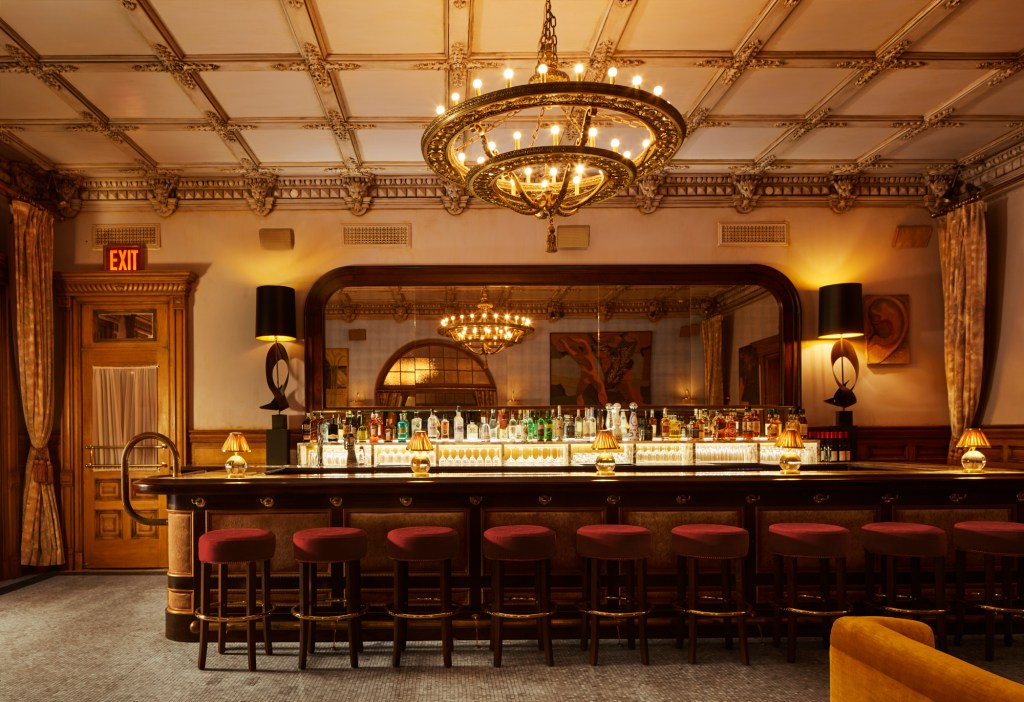 “The Chelsea has always seemed like a grande dame to me,” says co-owner Sean MacPherson. “And it seemed like the appropriate thing was to create the grand dame of lobby bars. And so we tried to honor the existing architecture and design, and build something that felt old world and classic. .

The hotel‘s new Lobby Bar – the building’s premier lounge – draws on the grandeur of iconic hotels around the world and speaks to a European sensibility, while also leaning into the building’s history. “It had been a bit set back over the past few decades, but it’s a lovely old building and looks a lot like the type of hotel you’d more often find in Europe rather than the US,” says MacPherson of the property, which was built in 1884. “Most of these grand old hotels have great bars in the lobby, there never were for some reason. [at Hotel Chelsea].”

The lobby bar is located on the ground floor of the hotel and features plush seating in jewel tones, vintage lamps atop a marble bar, and vintage details. Lounge seating is spacious yet intimate, catering to both passing hotel guests and local New Yorkers. “There is room for the elbows; in fact, you can sit down and make yourself comfortable. It’s like a really huge living room,” adds MacPherson.

The bar offers an upscale F&B menu curated by the Sunday Hospitality team to complement the sleek design of the space. Beverage Director Brian Evans has crafted an extensive cocktail menu that draws inspiration from classic drinks and also pays homage to iconic cocktails from bars around the world, including the Duke Martini for the Dukes Hotel in London, Arnaud’s French 75 for Arnaud’s restaurant in New Orleans and Tommy’s Margarita for Tommy’s Bar in San Francisco.

“House cocktails are a little more adventurous, and tributes maybe a little more familiar,” says Charles Seich, who leads F&B operations with Sunday Hospitality. The menu is the work of chef Jaime Young, who has turned to small plates to go well with drinks – caviar, salty martini oysters, beef tartare.

The Lobby Bar recently opened, and the hotel will continue to introduce new concepts throughout the fall, including a French-American restaurant and a rooftop spa and fitness center. A private event space, the Bard Room, also recently opened.

“We’re not trying to make it splashy,” MacPherson says of the hotel’s reintroduction. “The building has been around since 1884, and we’re just trying to keep its narrative consistent.”

More of the eye:

North Fork Hotel The Shoals roots at the water’s edge

Aquazzura celebrates the art of entertaining with the launch of tableware