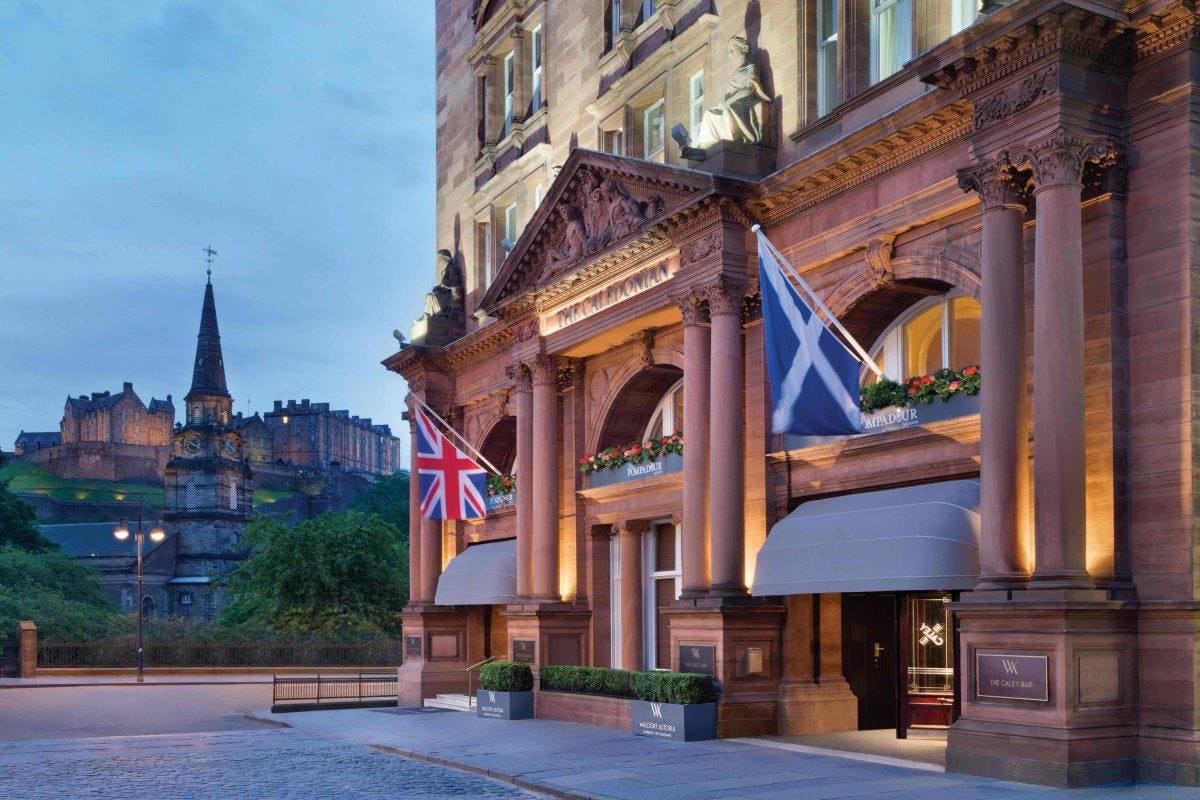 There is something inevitably romantic about old railway hotels and The Caledonian of Waldorf Astoria Edinburgh (or The Caley, as it is affectionately known locally) is no exception. Built in 1903, there is a grandeur about the building that will whisk you away and capture you at ‘hello’.

Situated in the heart of the city on Princes Street, the hotel is a majestic sight, with spectacular views up to Edinburgh Castle being one of its highlights. Step inside and the lobby, with its elaborate chandeliers and restored marble central staircase, won’t disappoint. The doormen in tartan pants nod to the destination, while the attentive service, with a 24-hour concierge, echoes the Waldorf Astoria’s commitment to personalized attention for all of its guests.

While the hotel has retained its position as Edinburgh’s most iconic grande dame, that doesn’t mean it hasn’t evolved over time. In recent years, she has become famous for her collaborations with some of the most glamorous names in the business. The first is the Guerlain Spa – the first and only in the UK – bringing a touch of Parisian spice to the city. With its 12.5 m swimming pool, its Guerlain cabins for tailor-made treatments and its chic relaxation lounge, it is the ideal place to get lost for a while. From Guerlain therapies to aesthetic massages, from make-up masterclasses to anti-aging facials, the treatments are innovative and avant-garde. For something new, try one of the aromatic experiences, which can be personalized to taste, and will bring a sense of 1930s glamor, which, of course, goes hand in hand with Guerlain’s heritage.

Find a corner stand, opposite the central bar, and start your evening with French onion soup or steak tartare. There is also a Crustacean Menu, from which you can taste langoustines, oysters or lobster. For main courses there’s the classic steak frites or duck with salsify, but for standout dishes look towards the fish section. Cod with crisp cheeks and samphire may seem simple but it’s a delight, while seared monkfish tail, olive gnocchi, chorizo, and fennel and basil mash is a knockout. Finally, it’s a mix between CrÃ¨me BrÃ»lÃ©e and Apple Tarte Tatin, which will transport you either to a checkered-dressed table more typical of a Montmartre restaurant.

For special occasions, Galvin’s Pompadour, takes the culinary offer up a notch. With what must be the prettiest dining room in all of Scotland – complete with Chinese blue floral wallpaper, velvet chairs and delicate wall sconces – it’s like stepping into a refined period boudoir. Regency. Large arched windows frame the city outside, while heavy tables draped in linen add a touch of formality to the meal. Fortunately, it’s not all about aesthetics, however beautiful they are. The service is second to none – here, again, the ethos of ‘True Waldorf Service’ can be observed, playing wonderfully with waiters who seem to be doing a silent ballet dance behind you. – while the dishes will make your heart beat faster.

The original Waldorf Astoria in New York can be credited with inventing Eggs Benedict in the late 1800s and inventing the recipe for Red Velvet cupcakes in the 1930s, but in Edinburgh it’s the attention to expertise modern culinary and innovation that is at the center. French-inspired dishes, using locally sourced, seasonal Scottish ingredients, are featured in a la carte and tasting menus. If you are stumped for the choice – and there is a lot on offer – opt for the signature Galvin dishes: Lasagne from North Berwich Crab and Beurre Nantais, followed by seared halibut steak, langoustine bisque, mussels, cockles and farfalle in squid ink. Finally, try the baked cheesecake with Perthshire strawberries. You will not be disappointed.

For a relaxed downtime, head to the heart of the hotel and the buzz peacock alley, a circular lobby lounge carved out of what was once the station ticket office (the Caledonian railway once passed directly below the hotel), with the original Victorian station clock. It is the perfect place for afternoon tea or a cocktail before dinner.

With new owners, Twenty14 Holdings, recently acquiring the property, and promising to honor the hotel’s history, as well as add value to it, The Caledonian’s legacy should be further upheld and preserved in the years to come. Already started is a redesign of the 241 rooms. With their high ceilings and period details, these rooms are already elegant and, without a doubt, a joy for any interior designer to work. Interestingly, the new decor is more noticeable for its clean details – muted paisley-print wallpapers, petrol blue velvet chairs, and finely distressed mirrors – rather than any modern and extravagant design touches. The sleek bathrooms, with a Carrera marble finish, also refer to the hotel’s roots at the turn of the century, while the views over Edinburgh Castle, or of course, don’t need to be improved.

In addition to the soft renovation, Twenty14 Holdings also said the hotel will be expanded over the next two years, with 50 additional rooms and another dining option opening in due course.

It is a beautiful tribute to the hotel brand Waldorf Astoria. In addition to its portfolio of 27 iconic properties around the world, it is also expanding its reach with new openings – first, later this year in Bangkok, and then next year in the Maldives. On the horizon is the highly anticipated London Admiralty Arch, which is slated to open in the capital in 2022. All of this adds to Waldorf Astoria’s expertise in â€œrethinking historyâ€ for a modern day traveler.

Banff’s Mount Royal Hotel, ravaged by fire, is slated to open on July 1