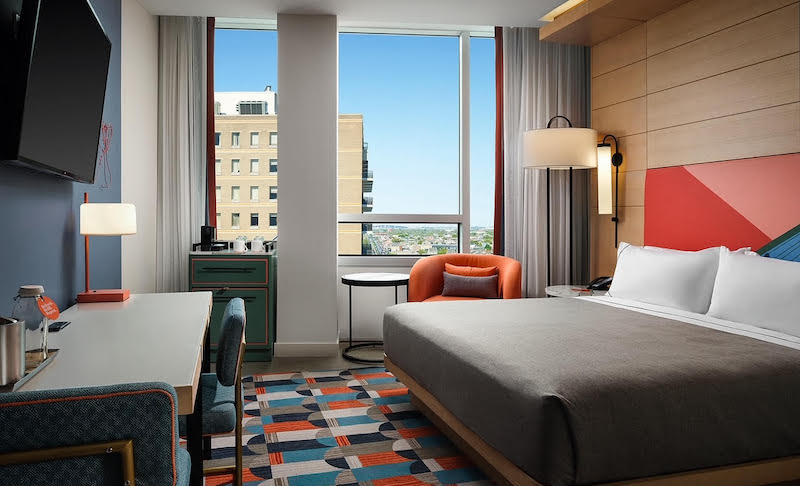 NEW ORLEANS — The 176 rooms Canopy by Hilton New Orleans Downtown is now open at 1100 Tulane Avenue in the Central Business District. In development since 2015, the 14-story hotel occupies the former Oil and Gas Building, built in 1959 and designed by August Perez & Associates and Edward B. Silverstein & Associates. The building was listed on the National Register of Historic Places in 2014 after being vacant for more than a decade.

“We are thrilled to bring the Canopy brand to New Orleans and offer guests a refreshing hotel option that matches the city’s energetic atmosphere and culture,” said Phil Cordell, Director of Hilton, in a press release. “The hotel’s design, as well as the food and beverage concepts curated, were influenced by the surroundings, allowing us to authentically connect guests to the neighborhood made famous for its vibrant architecture, music and cuisine .”

NOLA Lodging LLC purchased the building for $7 million in 2014 from Renaissance Neighborhood Development Corp. NOLA Lodging is affiliated with Maryland-based Baywood Hotels, which developed the Canopy by Hilton in a joint venture with NewcrestImage, a Texas-based investment firm, before selling it to Summit Hotels and Resorts, a Philippine-owned hotel brand and operated by Robinsons Land Corporation. The hotel is part of a joint venture between subsidiaries of Summit Hotel Properties and GIC, Singapore’s sovereign wealth fund.

Aimbridge Hospitality, based in Plano, Texas, will serve as the third-party management company. In 2020, Aimbridge said it operated more than 1,330 hotels, resorts and conference centers in North America and the Caribbean, and 93 internationally.

According to Hilton, the Canopy brand focuses on “connecting with neighborhoods and local atmosphere”.