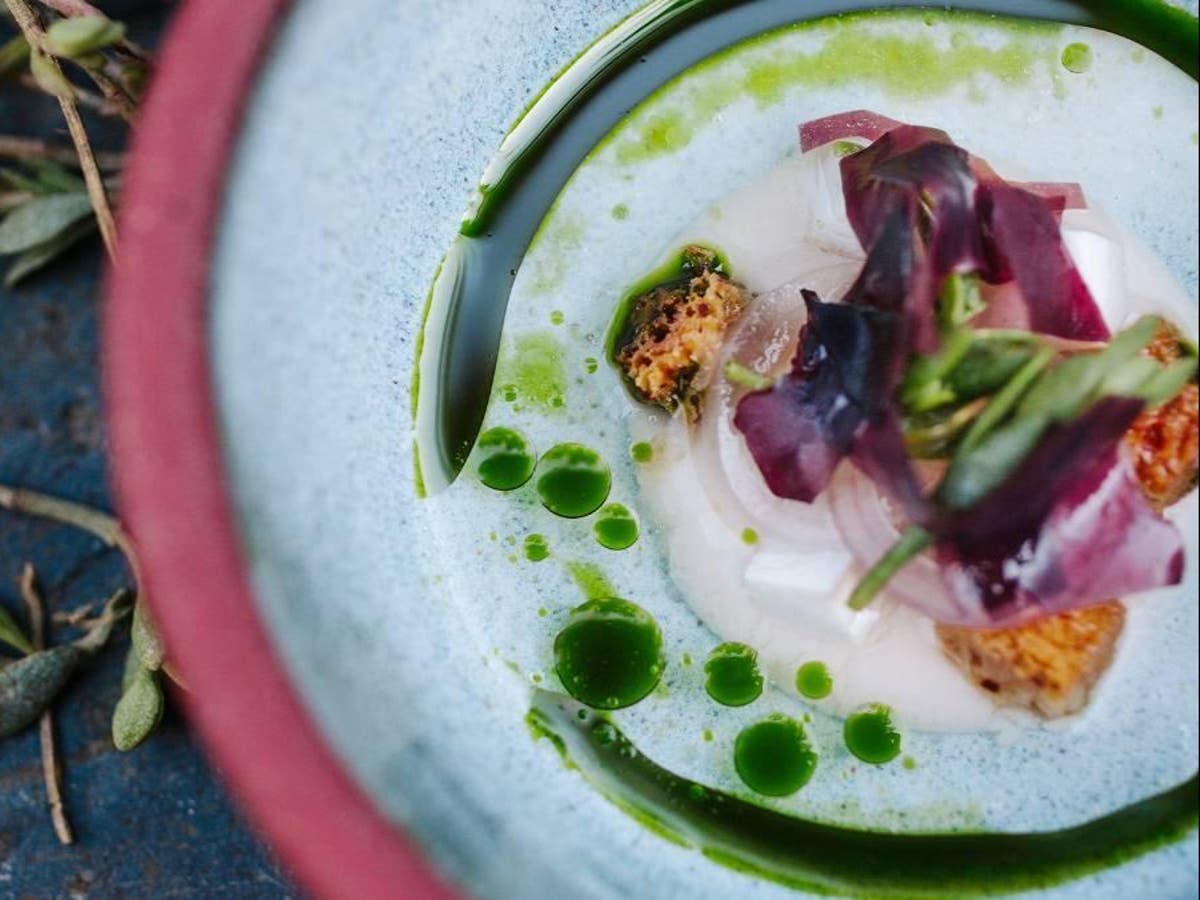 For the first time in 16 years, a restaurant outside England has been named the best in the UK at the Estrella Damm National Restaurant Awards, which were announced at the Hurlingham Club in London on Monday.

Ynyshir, the traditional country house hotel overseen by chef-patron Gareth Ward on the west coast of Wales, was described as ‘uncompromising’ in an Instagram post of the awards this morning.

He also described the dining experience at the restaurant like no other: combining a punchy soundtrack with a succession of tiny plates of punchy, fire-cooked Japanese-influenced cuisine.

The restaurant sources most of its produce locally and much of it is aged in-house, with chefs serving dishes directly to diners themselves.

“What Gareth Ward did in Ynyshir is remarkable,” says Stefan Chomka, editor-in-chief of Restaurant by BigHospitality, which oversees pricing. “Taking over a restaurant in a traditional country house hotel and putting such a personal, forward-thinking stamp on it was a bold and courageous move – a real statement of intent – ​​but one that really paid off.

“Ynyshir is without doubt one of the most unique and exciting places to eat in the UK right now, perhaps in the world, and is a very worthy winner of this year’s awards.”

Amelia Eiriksson, creative director at Ynyshir, said The Independent“We’re all blown away and extremely humbled because we’re just doing something we love. We’re just trying to give our customers a huge experience, in a beautiful part of the UK. We get the best possible ingredients and prepare the food that we like to eat, store the wine that we like to drink and listen to the music that we like. And I hope people will like it too!

Moor Hall in Lancashire, which has ranked No. 1 for the past two years, took second place this time around, while the London Brat in Shoreditch took third place ahead of The Ritz, at No. ° 4.

The highest new entry, at No. 5, and the winner of the opening prize of the year went to Mayfair’s trendy new Indian restaurant, BiBi. Chef-patron Chet Sharma, who cut his teeth at Moor Hall and L’Enclume, said The Independent“It’s always a difficult time to open a new restaurant, but amidst all the challenges our industry faces, this success truly relies on the loyalty and continued efforts of the entire BiBi family.

“To enter the Top 100 list at #5 is such a huge achievement – I couldn’t be more proud of what we have started to build at BiBi. A big thank you to everyone who has been part of our journey to now.

Will Murray and Jack Croft’s Fallow, which opened its first permanent site in St James Market after a successful pop-up, also entered the list for the first time, at No 13. Murray and Croft wrote to The Independent via email: “We’re thrilled…It’s incredibly humbling to be alongside all these highly esteemed restaurateurs and restaurateurs.”

London topped the list this year, with 60 in the top 100 and just three restaurants outside the capital making the top 10.

Simon Rogan, chef-patron of L’Enclume in Cumbria, was named Chef of the Year, while the Ritz won the Service Award and Chef to Watch for Spencer Metzger. The Lifetime Achievement Award goes to Ruth Rogers, chef-owner of the River Cafe, who celebrates her 35th birthday this year and has played a pivotal role in transforming London’s culinary scene. “Ruth is one of those rare professional chefs who transcends the world of cooking and gives it a more human and personal element,” adds Chomka.

Inver, which Molly Codyre called “wonderful” earlier this year, was named Scotland’s best restaurant; Nuno Mendes’ Lisboeta, which opened to much fanfare on London’s Charlotte Street in March and which we visited last month, has been dubbed ‘One to Watch’.

Other notable wins of the night included Restaurant of the Year, which went one step further, at The Fordwich Arms and The Bridge Arms, both in Kent, run by Dan and Natasha Smith. The first Food Lovers Award, which was voted on by the public, goes to Beach House in Oxwich; and the Sustainability Award went to Stockport Restaurant Where The Light Gets In.

Juliane Caillouette-Noble, chief executive of the Sustainable Restaurant Association, which chaired the awards, said: “Chef-patron Sam Buckley exemplifies the fantastic steps many restaurants are taking to not only source and serve the best ingredients with minimal impact on the environment. , but it also goes further by bringing together farmers, their customers and the wider community to find solutions to some of the most serious problems in our food system.

Estrella Damm UK Country Manager James Healey said: “This year’s list includes a huge pool of incredible talent who deserve this recognition for being the best in the UK.

“We hope this list encourages everyone to get out there and support the best restaurants while celebrating industry success.”

The winners of the Estrella Damm National Restaurant Awards

Best restaurant in England: Hall of the Moors

Restaurateur of the Year, sponsored by Entegra: Dan and Natasha Smith, The Fordwich Arms and The Bridge Arms

Opening of the Year, sponsored by OpenTable: BiBi

One to watch, sponsored by Woods Foodservice: Lisbon

The Sustainability Award, sponsored by Estrella Damm: where the light enters

Gastro Pub of the Year, sponsored by Estrella Damm: The Angel at Hetton

The Service Award, sponsored by Liberty Wines and Rathfinny Wine Estate: The Ritz

List of cocktails of the year, sponsored by Tito’s Handmade Vodka: K.O.L.

The 100 best restaurants in the UK:

2. Hall of the Moors

27. Tony Parkin at the Tudor Room

32. The Black Swan at Oldstead

61. The Man Behind the Curtain

63. Hélène Darroze at Connaught – read our interview with Darroze here

73. The House of Quality Chop