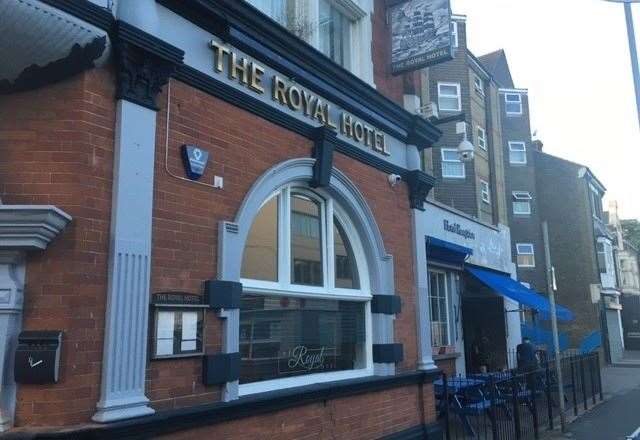 So I found myself sitting in the exact same seat at the Royal Hotel which I first visited in December 2019. (If you want to take a look at the review – it’s here)

The last time I was there the bartender recommended that Wetherspoon around the corner would serve a better pint, but this Sheerness boozer is now under new management.

This time it was only table service and our tiny bartender was quickly by our side to explain that it was only cash and ask us what we would like?

The full drink menu is laminated on a series of cards at your table and we started with a pint of Moretti and a Whitstable Bay for just £ 5.45 a pair.

Much like last week’s pub – the Jolly Caulkers in Chatham – there were coasters on the table, the bartender was playing music on the jukebox, and there was a lot of hi-vis clothing on display.

Unlike last week’s pub, a tradition-steeped boozer that hasn’t changed in decades, this is a pub in transition. And, like all things in transition, there’s bound to be an element of confusion – in this case, the transition happens behind a draped sheet behind the bar, but more so later.

First of all, let’s fix one thing. I have nothing against people who work hard and have to wear safety gear for their job, or the fact that they rightly deserve to come in for a pint after a shift and keep their shirts on. or orange pants. But why on a hot evening would three people, including two women, choose to sit there with hi-vis vests?

The bar has been completely redone, inside and out, since my last visit and, with its bright blue upholstery, it has definitely been upgraded.

In fact, the new owner was sitting in the bar having business meetings while the SD apprentice and I were there. one bad word.

Along with the renovations there has been a marked improvement in the atmosphere at the Royal Hotel and the fact that the food is no longer being served is another important step in the right direction – instead of the inedible sandwich we were served previously the apprentice and I settled for a packet of crisps each.

The gentlemen are always on the right side, just behind the bar and there is a sign to tell you that they are behind the sheet but watch the step.

When I returned to the bar, the apprentice informed me that I had missed out on all the excitement as a schoolgirl ran through the open door to steal one of the free masks.

The pub may still be halfway through its transition, but I’m happy to be able to report a big improvement over when I was last there.

Okay the ladies restroom isn’t open yet, smoke comes out the open door and the owner slips into the disabled restroom rather than walking behind the sheet with his regulars, but the Royal Hotel did. giant steps.

Finally a special mention has to go to the chatty local Nathan known as Nev who was like a breath of fresh air and helped remind the apprentice and me of what we really missed in pubs during lock – the chance to drop in and share some words with interesting people.

And, this quite decent gentleman gave us both a drink as well. Yes, this new royal visit was definitely a good idea.

Decor: It’s in transition and the builders are still on hand, but many of the worst horrors have been removed and the bar has been improved beyond recognition. ***

To drink: Previously there was no beer at all, so having Master Brew available is at least a step in the right direction. The lager and Guinness were both good – not sure if I will see Dark Fruit again. **

Staff: Compared to our previous hostess, the barmaid Rae was efficient and friendly which is certainly a big improvement on our last visit. ****