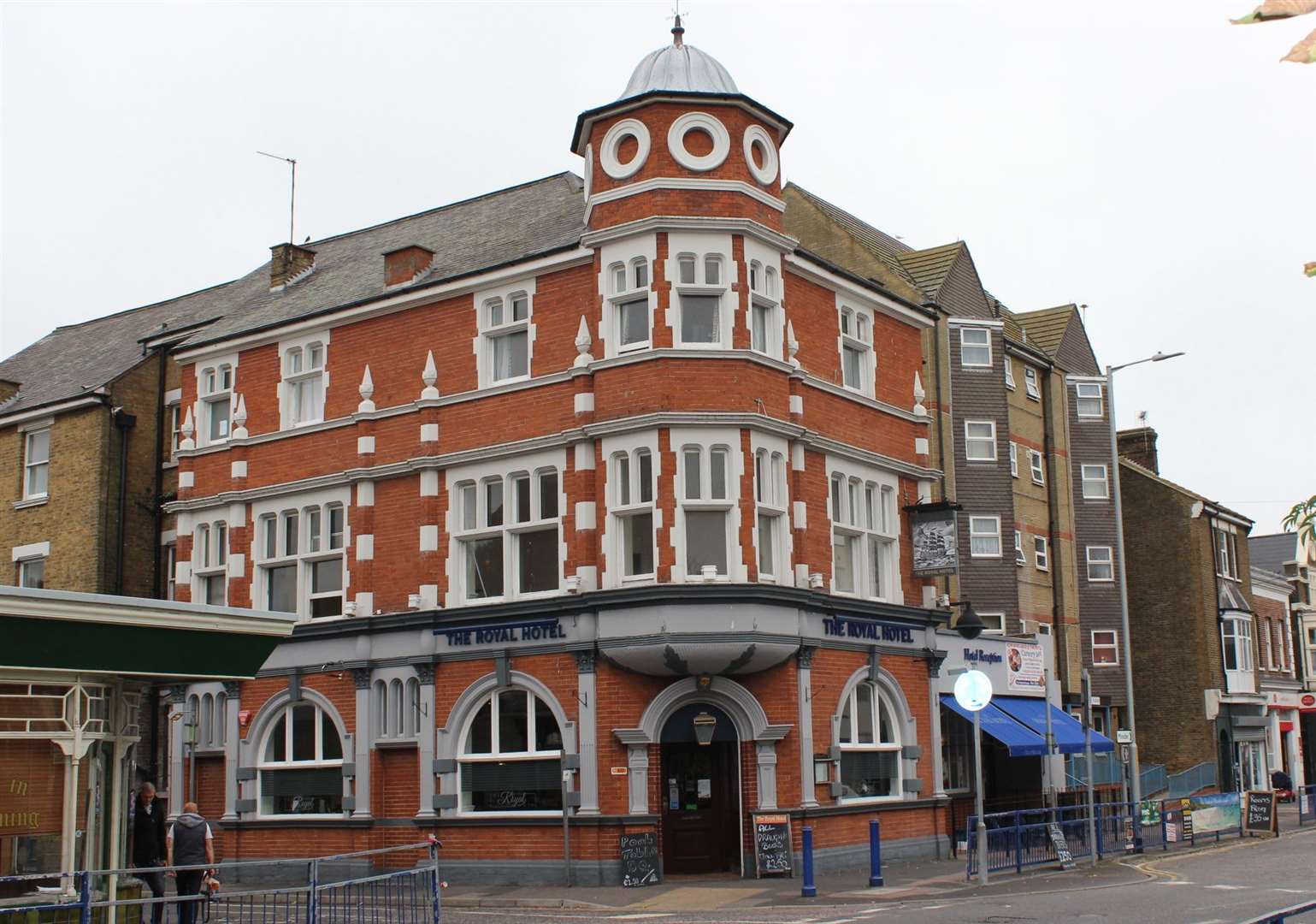 One of Sheppey’s most iconic pubs has changed hands.

The 196-year-old Royal Hotel in Sheerness was bought by friends Rashmi Dedigama, 28, and Peter Karan, 60.

The London pair sank £ 600,000 in the Victorian premises which were built in 1825 by Sir Edward Banks who also built parts of Sheerness Royal Dockyard and the London and Waterloo Bridges.

Peter said: “We saw The Royal advertised by Christie’s last June and made about 50 visits to the island before deciding to buy.”

The couple’s company Dedigama Holdings completed the purchase on March 31.

Although they had a “soft” opening on Saturday (May 22), a team of painters, decorators and electricians are still busy. The front bar with its impressive wooden counter is finished but work continues behind the scenes to modernize the room and the meat to be cut. at the back of the building.

Rashmi admitted: “We originally bought the property thinking about renting it out, but the more we got to know Sheppey the more we realized we had the opportunity and the space to do it ourselves. Sheerness and the island have lots of potential. “

He added: “We looked around and saw that there were a lot of take out and kebab shops but not a lot of restaurants. As this is one of the most iconic properties and prestigious cities, we thought it would be the perfect opportunity. There is a lot of passion on the Island. We want to light the fire and see where it goes.

They have already hired Katherine ‘Kat’ Cordier, 41, to run the place and have hired Jill Gray, 54, who has served behind the bar, on and off, for 24 years. Kat said: “It’s wonderful to be back. I love being here. It’s very exciting.”

The premises at the corner of Sheerness Broadway and Royal Road have 13 rental rooms upstairs and a reception hall which has been used for weddings and performances. For a while, it served as the official seat of the Rock ‘n’ Roll Loony Party.

The Royal is a former Shepherd Neame Inn and was for a time run by Island businessman Kevin Burgess, who is still behind the Flying Dutchman and Aviator pubs.

Under her tenure, directors Sarah and Gareth Segrove put the building on the map with a fiery appearance on Channel 4’s television battle Four In A Bed.

After they left he also had an unfortunate visit from our own secret drinker in December 2019 who was warned on his arrival by one of the staff: “The beer is not lit, it has not been turned on. lit all week If you want beer then you better go to Wetherspoons around the corner.

He admitted: “It wasn’t quite the reception I expected.”

The Royal has undergone several transformations in recent times, including a £ 100,000 facelift by Shepherd Neame in 2013 and a redesign by Mr Burgess in 2015. It was named Sheppey Pub of the Year in 2008 and 2010 under owner control Dave Ingram.

He’s also hosted a ghost or two, according to Sheppey’s psychic Charlotte Clark, who has organized a “ghost school” in the bar with her crystal ball to hunt down another type of spirit.

Charlotte, a mother of five, said at the time: “I looked upstairs and saw the ghost of a senior Royal Navy officer standing in one of the bedrooms with his hands behind the back. I also saw two small children on the stairs and a maid called Mary in room 5 with keys and a packet of Polo mints in her pocket.

Headmistress Sarah said with a hiccup: “My mother went to a psychic years ago who told her that I would one day be contacted by a lady called Mary. It’s very weird. “

The Royal was built by Sir Edward Banks, an English civil engineer and pioneer of steamboats.

He was born at Hutton Hang near Richmond, North Yorkshire on January 4, 1770, and after spending two years at sea he became a laborer in 1789.

He worked under engineer John Rennie on the Lancaster and Ulverston canals and was chief controller at Jolliffe and Banks, a partnership between him and William John Joliffe. The couple built shipyards, lighthouses and prisons, including the Staines, Waterloo, Southwark and London Bridges – for which Banks was knighted in 1822. They also created new canals for the rivers Ouse, Nene and Witham in Norfolk and Lincolnshire.

Banks found himself on Sheppey to help Rennie rebuild Sheerness Royal Dockyard between 1812 and 1830. The contract for excavation, piles and walls to build and equip “the largest warships” was worth the astronomical sum of £ 3million.

Banks and Joliffe failed to win another contract in 1817 when they refused to reduce their price to less than £ 2,000 from the lowest bid, but then built another section for £ 850,000.

While in Sheppey, Banks designed and built The Crescent, where now stands the Sheerness Clock Tower, Bank Terraces and the Royal Hotel with “pleasure gardens” (now Beachfields) all the way to the edge of Wed He added a road in front of the hotel which was modestly called Edward Street in his honor. It was then renamed simply Broadway.

He and Joliffe also started a three-time-weekly steamboat service from Sheerness. The couple invested in the General Steam Navigation Company in 1824.

Around the same time, Banks bought Red House, a neighboring farm in Halfway, and established Sheppey Court, a large stately mansion as a country retreat. She is still standing, although a new housing estate is being built around her.

Sheppey Court, later converted into a retirement home, became his third home. He already owned property at Oxney Court, Dover and Adelphi Terrace off The Strand in Westminster.

On a personal note, Banks married Nancy Franklin in 1793 and the couple had five sons and three daughters. After Nancy’s death in 1815, Banks married his business partner’s sister-in-law, Amalia Pytches, in 1821. Banks died at the home of one of his daughters in Tilgate, Sussex on July 5, 1835. , and is buried in Chipstead Cemetery.

One of his sons, Delamark (there is a Delamark road a few yards from the Royal), also spent a lot of time in Sheppey and helped improve the island. He built a horse racing track across from Sheppey Court, which was initially very popular, but closed in 1857 when numbers dwindled.

Delamark later acquired land in Eastchurch and Leysdown and also owned Warden Court which he remodeled and added to gardens. At this time, Warden Church, which was later to be demolished before it slipped over the cliffs, was in appalling condition and in 1836 Delamark rebuilt it with stones taken from the Old London Bridge.

It adds a turret, stone floors, a ceiling and sound benches. Two more stones from London Bridge were laid in Warden Gardens. One was in Warden Court and the other in his bailey’s garden bore the inscription “London Bridge 1176-1832”.

A stone removed from the steeple of the church during the demolition was placed at Stone Bridge House and inscribed: “The tower of this church was erected at the expense of Delamark Banks Esq, magistrate of this county, in 1836 AD with the stone from the Old London Bridge which was built in AD 1176 and dismantled in 1832. “

Delamark Banks died in the late 1830s. His gravestone, which was in Warden Cemetery, was removed and placed in Eastchurch Cemetery where it can still be seen. There is also a commemorative plaque on the north wall of Minster Abbey.

Read more: All the latest from Sheppey